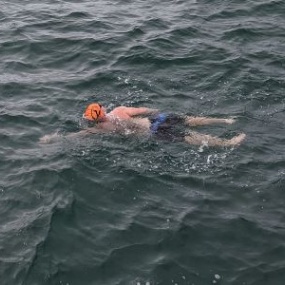 “Thursday 12th August, was a big day for our Year 11 cohort, as a large number of students, would be finding out their GCSE grades. For me, this was also a big day. After a 2-year journey, of training through lockdowns, and delays due to storms, I fulfilled a lifelong ambition to swim the English Channel, as part of a group of six swimmers. At 1.53am, from a Dover beach, my relay team started our bid to swim the channel. Through waves, a strong tide, and a water temperature that would be a high of 18 degrees, we began.

Each swimmer would swim for an hour, and then rest until their next rotation. To reach this point we had to attend a selection weekend for the chosen charity (Aspire). This entailed attending three training weekends within Dover Harbour, and completing a qualifying swim of two and a half hours in a water temperature of below 15 degrees. However, despite this, and the hours of training we had all completed, within lakes, reservoirs, and pools, nothing could have prepared us for the waves and tides of the channel!

As the first swimmer put it, “I wasn’t swimming the channel, I was surviving it!” The first three swimmers were dragged by the tides from one side of Dover harbour to the other, and as a team we were struggling to make forward progress. After my first swim of an hour, I had moved forward 1400 metres, and had been stung twice by jelly fish. On the turn of the tide, we started to make more forward progress, and we started to be pushed into the shipping lanes, and what is called ‘the separation’. This is where the skill of the pilot boat is needed. They must have expert knowledge of tides and winds, to get the swimmers through the shipping lanes safely. After our second rotation, although there were no jelly fish, I did face strong winds and current pushing me backwards. I managed to gain 2270 metres. We were now nearing France, and thankfully, the current and winds dropped off as we approached the coast. The next two swimmers had perfect conditions. The sea was flat, with no wind and the tide was with us for the first time in the swim. We made up the ground we needed and the third swimmer on the rotation was lined up to land. On a small beach close to the port of Calais, he landed. After 14 hours and 29 minutes of swimming, we had crossed the busiest shipping lane in the world, and completed the swim that was first achieved by Captain James Webb in 1875, in a time of around 22 hours.

By completing my channel swim, I have raised £2,419 for Aspire, a spinal injury charity, which supports those people who have sustained Spinal Cord Injuries, and now find themselves paralysed.”